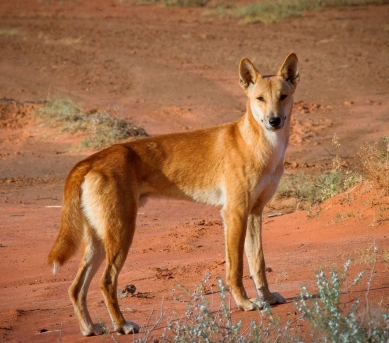 In a recent paper and opinion piece in The Conversation it was argued that the case for dingo reintroduction (e.g. see HERE) in Australia is weak.

In a paper published in the journal Food Webs, we responded to these criticisms and argued that (1) the case for dingo reintroduction has never been solely based on the reintroduction of wolves into Yellowstone National Park, and (2) that the climatic circumstances under which dingoes can provide net positive effects on ecosystems via trophic cascades are those that typically prevail in Australia.

We concluded that the case for dingo reintroduction in Australia remains strong, and urge managers and decision makers to consider the mounting evidence that dingoes can have positive effects on ecosystems before deciding whether or not to reintroduce dingoes into ecosystems where they have been extirpated by humans. 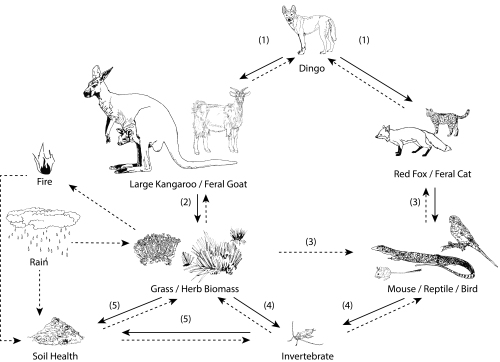 If dingoes suppress large herbivores (e.g. kangaroos and emus), then grass and herb biomass is expected to increase. If dingoes suppress lower order predators (e.g. foxes and cats), then numbers of small mammals (e.g. mice), reptiles (e.g. goannas), and birds (e.g. parrots) are expected to increase. Invertebrates also may respond to improved vegetation conditions and contribute to soil quality. However, the strength of all interactions may be influenced by the extent of rainfall and fires (hashed arrows). Numbers represent the predicted sequence of events based on trophic cascade theory.