From desert dingoes to alpine wolves

Next week I will be heading out on my first official field trip.

I am well equipped to working in the arid deserts of Australia, but working with wolves and deer in the snow is a whole new ball game.

I will be working with students from the Predator Ecology Lab at the University of Washington (http://faculty.washington.edu/wirsinga/) who are investigating the impact of recolonising gray wolves on deer species in Washington state. The study site is located in the Okanogan and Ferry counties where there are sites with and without wolves:

The research group are putting camera collars on the deer to look at short term behavioural changes in response to recolonising wolves. They are also using GPS collars to collect long-term movement data. The bulk of the field work will involve catching deer in traps like those shown below: 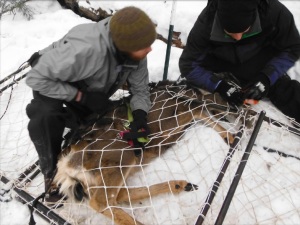 Why is the research important?

Wolves were never re-introduced into Washington state, like they were in Montana, Wyoming and Idaho. However, since the mid 1990’s wolf populations in North America have begun to recover and they have expanded into other areas. In fact, by March 2013 the Washington Department of Fish and Wildlife confirmed that there were at least 10 wolf packs in Washington state – the packs have all been given names and can be followed on this link: http://wdfw.wa.gov/conservation/gray_wolf/packs/.

With the newly established presence of a top-predator in Washington state it provides an ideal opportunity to assess how ecological communities, who have lived for almost 70 years without wolves, will respond. The research will also help to develop management plans and shared use of deer by (i) hunters, which bring in substantial revenue from buying tags and (ii) wolves, which are afforded protection and can also attract tourist dollars.

I am very much looking forward to learning more and reporting back to you all about my time on the Washington Wolf-Deer Project: https://nwsportsmanmag.com/editors-blog/to-cry-or-not-to-cry-wolf-or-something-in-between/

By Thomas Newsome in Uncategorized on November 26, 2013.
← Rewilding: bears and condors in Big Bend and the Grand Canyon Just out – new paper on dingo diet selection →